Aaron has been already 4 months old. He was always a family clown... 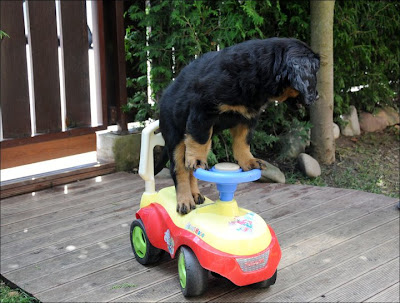 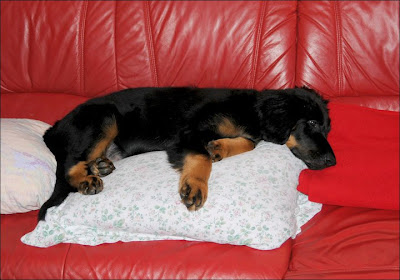 Sofawart Aaron, almost 4 months
Nessa and he were really great team. Ari was always following his mommy Nessa everywhere, learning from her, playing with her, starting already to be a little bit protective over her....we took him to a lot of places for socialization. He was with us on the farm: 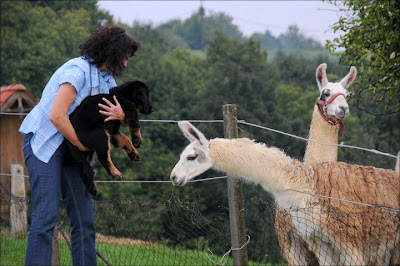 One of interesting places for him was Ljubljana ZOO, where we were also with his siblings. 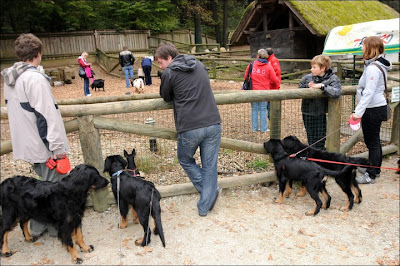 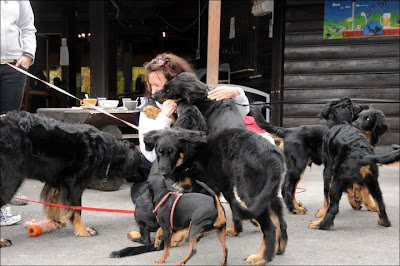 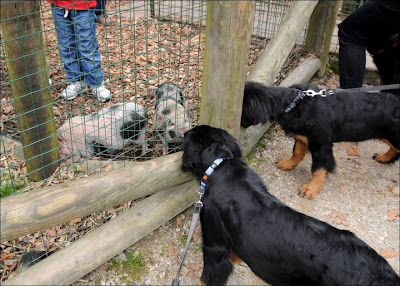 And than October came....
....and a phone call. My friend Dušica called me and ask if I'm willing to give Ari to a great family, who had already hovawart for 14 years and which died few months ago. They knew and liked very much our puppy's grandfather, very well know stud, Multi CH Belfast v.d.Haselhohe, owned by Dušica Bučer, and they wanted a puppy from his bloodline. 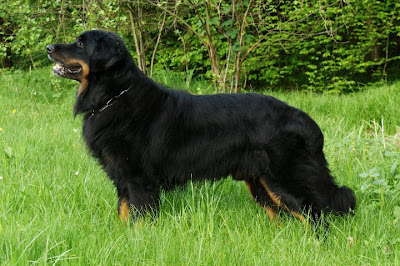 When Viktor and Silvia came to see Aaron, it was love at first sight in every way. They liked Nessa very much and when they saw "little" Ari, the decision from their side was made. But we still couldn't decide immediately to let our beloved boy go, so we were taking one week for reflection. When we took all under consideration, we decided that we will let him go to this wonderful family. We know from talking with Viktor and Silvia, that they will love him very much and that he will have similar life like he would have with us. So he left for Austria after a picnic we had with all puppies. 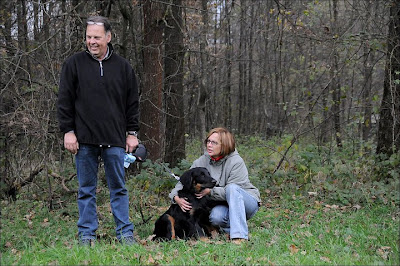 We are very happy now, that he went to Viktor and Silvia's home. He has a wonderful life there, he is their baby. He has also a company of two cats there, Bruno and Leny, with which he even share his bed. 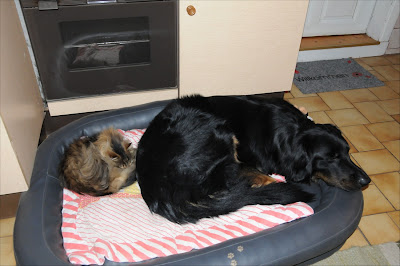 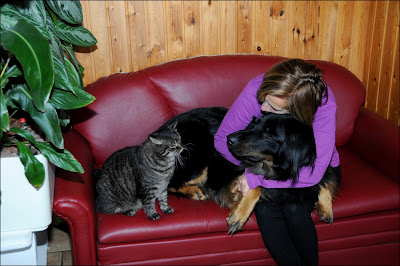 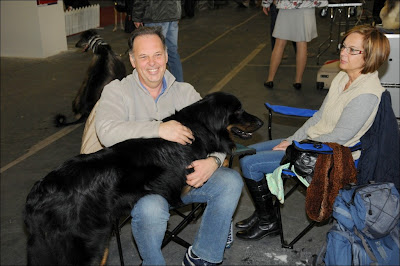 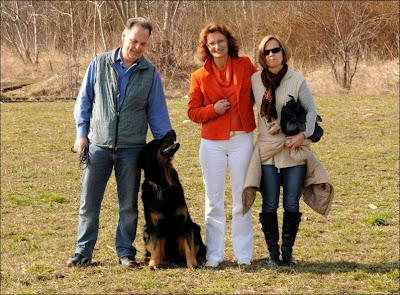 And so his life continue in Pinkafeld, Austria.

Aaron was born as a fourth puppy on a warm, sunny June day. He was the heaviest among 7 brothers and sisters and he kept that advantage until he left to the new home. 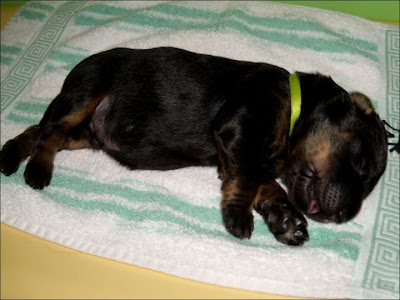 It  can certainly be seen that he had the biggest appetite :-) He also had a special character. Always the first when the food was involved, he didn't take care of no one. And when he was finished, he crawled into some quiet corner and slept until...well, next feeding time :-)
But on the other hand he was extremely gentle and tender boy. He grows immediately on my husband and me and he stayed our favorite until now. How can you defend against such puppy looks? 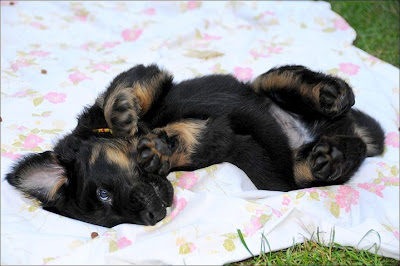 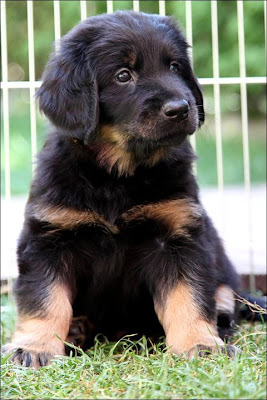 You can't, can you? So he was growing really fast, his foots looked like bears. Most of the time he was following me everywhere and when my husband was at home,  he was lying on the couch with him and he nibbled his beard. Bonding was stronger each day and we almost made a decision: Aaron stays at home! Nessa and he were great team already. 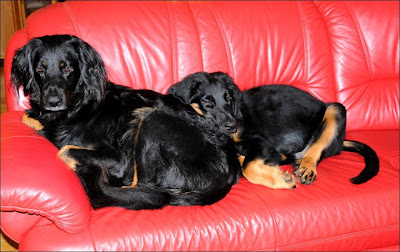 Summer was ending, we decided to go with him, his mommy Nessa and his uncle Nash (who is BTW European club winner) to the seaside. Aaron was extremely nice and perfect puppy.
He wasn't afraid of his uncle (on the end he was sleeping on his blanket and Nash was laying beside - all confused, like : hey, kiddo, that's my blanket :-)) 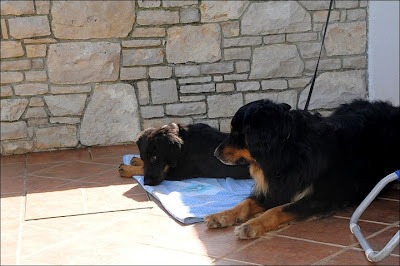 He wasn't afraid of the water, neither of the boat riding but mostly he enjoyed walking on the streets of Pula. 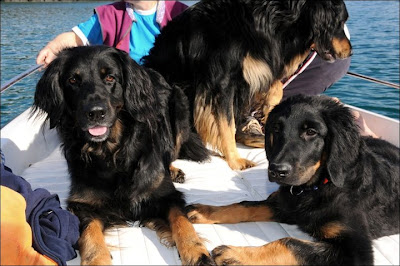 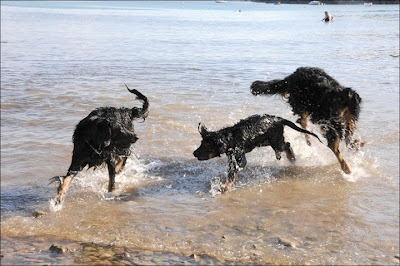 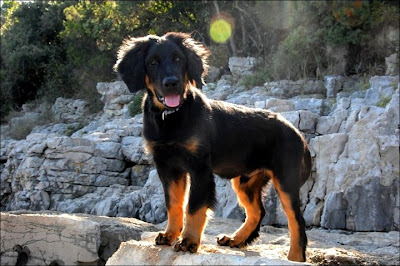 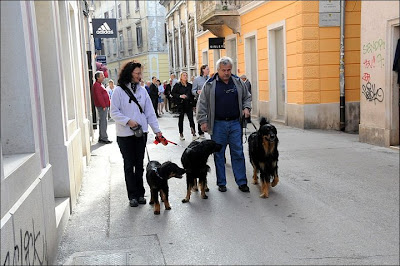 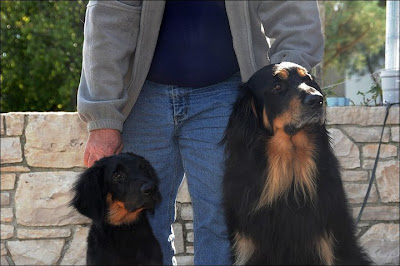 He was proud to be a "competition" to his uncle Nash, who was surprisingly gentle towards him. But that is our Ari. Uncomplicated, tender but yet very self-confident young boy.
And then the day come.....but about that some other time :-)
Avtor Hovawart Aaron vom Barogian Land ob 20:48 2 comments: Povezave do te objave

My name is Aaron. Aaron vom Barogian Land. And this is my new Blog.
Here we will post about my achievements and my life, which is very dynamic. I have two families. In one family I was born, with other family I live. Where I was born they speak Slovenian language, where I live they speak with me in German. I'm often with both of my families, so I understand two languages and I'm very proud of it. 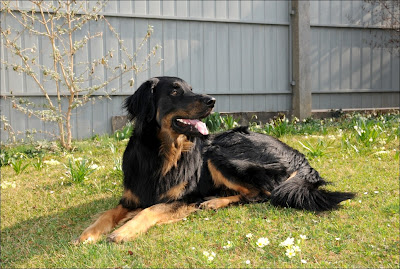 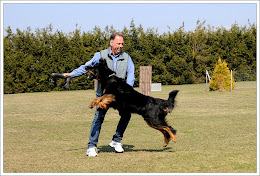 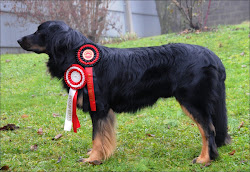